This game was created by WARG president Zeke Nelsons of Pyrefly Services for the #PushJam. It's built on the Push SRD, and made using the 2-page template. We have plans for an expanded version in the near future that "hacks" the Matrix scene generator template.

This 2-page version is available for PWYW, and will stay free even when we update with the expanded version.

Absgalan is a story-world created by the WeARGames team for an Alternate Reality Game we ran, which featured two young Starseekers in the Absgalaran church— a cult that worships the King of the Starscape, Absgal. It featured a unique conlang (some bits of which are included here) and a card game that could change history in real time.

That game is the titular Absgalan, played annually by members of the church worldwide with a small portion of what is called The King's Deck. It draws from two piles— Echoes, which are people, places, things, and ideas; and Alterations, which are verbs that describe what happens to the Echo that they are paired with.

As the game is played over the course of the month of Ommudempora in the Absgalaran calendar, it pulls cards that represent ancient times, the recent past, and, towards the end, the present, altering history as it is played. Play consists of rounds where 3 Echoes and 3 Alterations are played, and the stories of how these alterations happen are told. 3 rounds makes up one Era, and three Eras make up one Eon. The game ends at the conclusion of the third Eon, to be played again in a year's time.

Also pulled from the King's Deck are cards called Wonders— magical, holy relics of Absgal. Wonders are pulled in the second Round of every Era, and can be applied to any Echo that has already been Altered. Wonders can be banked until the end of an Eon, when they must be used or lost. The Deck itself is a Wonder— one of the few held by the Church in modern times.

In this ttrpg, you play in the world of Absgalan, as a group of Starseekers (or at least one aspiring to become a Starseeker), seeking to serve the King in a way befitting this modern age. The Church is infamously technophobic, and thus has struggled to maintain itself in the digital age, but they have finally relented enough to allow the younger generation of Starseekers to find ways to reconcile the ancient teachings with the modern world.

When creating your character, you either roll or choose a trait from each of the 6 categories (each trait should only be used once within the party) and interpret them to form who your Starseeker is as a person, what their goals are, and how they will interact with the world. The expanded version of the game will include additional lore and definitions of some terms and concepts, but you are encouraged to apply your own interpretations to everything, and build your own lore. The joy of the Push system is that it is meant for collaborative storytelling at its finest. Any questions you would normally ask of a GM, you may pose as yes-or-no questions to the Oracle, and build your Absgalaran world based on the results.

Once you have your characters and have sussed out some of the lore and relationships with the others at your table, look at your Mission and Agenda— the Mission (" it falls to you to seek out ancient Wonders, and use their power to fight back Akreis' creeping entropy") is the main thread that guides your story. The Agenda is specific goals you strive to achieve on your adventures in order to earn additional Traits for your character.

When you have a good grasp of your goals, then you roll on the Matrix— a list of scene prompts that you'll use to collaboratively frame scenes with your table to create adventures and challenges for your characters to overcome. When you feel you've gotten everything you can out of a scene, roll a new prompt on the Matrix.

The main goals we have with the expanded version of Absgalan are: 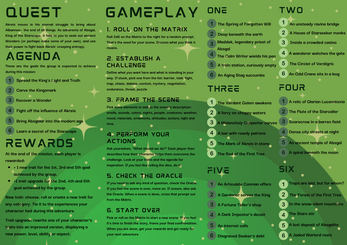 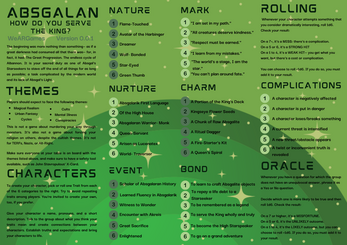 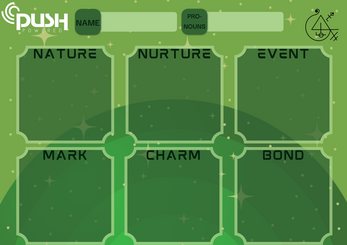 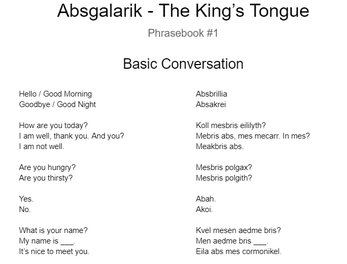 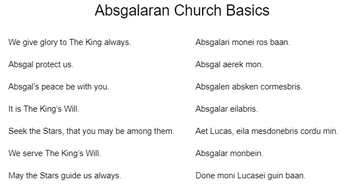